So excited! Saw two robins yesterday and I have access to this beautiful south facing window at my "sleeping  around job" so I have started a huge garden! Someday, I'm going to have greenhouse attached to my house, but this year I am blessed with this wonderful window! Hopefully, it won't get too spindly before we can transplant stuff into the gardens. I have all kinds of lettuces, spinach, swiss chard, kale, kohlrabi,  several types of tomatoes, lots of herbs, some luffa gourd ... probably a bunch I'm forgetting! I probably have to much, but that's OK. My elderly client is very impressed with this project and I am planning to plant a few of them around his house this summer. Good therapy for an old farmer! 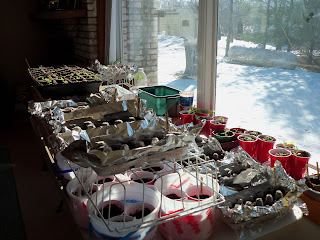 For the most part, I have used egg cartons for the plants I hope to be able to transplant within a month. The red plastic cups have tomatoes and luffas that I won't put out until later. I also have a few tubs planted with kohlrabi. Grampa Tom has planted it really close together in our raised beds and then transplanted the ones he thins out with a lot of success, so I didn't bother to make separate containers for them. I have a sunlamp that I am using to extend the daylight hours. Hopefully, this will be a success!
What are you doing to prepare for spring?
God Bless You All!
~Grama Sue
Posted by Sue Whitson at 8:15 PM No comments:

Thought I ought to chronicle the "Worst Storm in History" from a Grama Sue's Farm perspective. To be quite honest, we've been through worse! Just after Grampa and I started dating in December of '78 it started snowing and it didn't quit for about 3 1/2 months. By this time, we had been snowed in together three times and were beginning to be quite used to each other's company! We were actually looking forward to reliving some of those days, but alas, the snow plows have been by already! 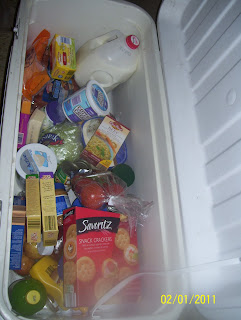 We had ample warning that the storm was coming so we went to town to stock up on supplies. We didn't need much, but I needed to go grocery shopping anyway. Grampa wanted to get some fuel additive for his tractor and a couple of heat lamps to put in the chicken houses, so I tagged along. One of the wonderful things about living in the country is that even if we couldn't get to town, we wouldn't starve for at least a couple of months. We were hearing reports from the bigger cities that the stores were out of milk and eggs. Fortunately, our eggs were in two of those stores, so we will have to get out an resupply them :) But, seriously, there probably isn't enough food in the cities to feed people for more than 3-4 days. Out here, you can't go to the store everyday, so stocking up is just a country habit! 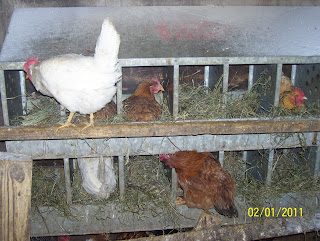 When we got home, we made sure the animals had fresh bedding. The chickens had already decided to come inside. 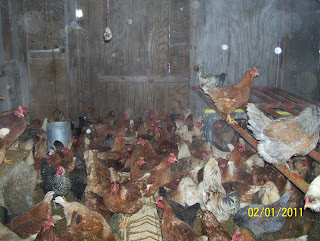 Geese are rather silly creatures ... only 3 of them had the sense to go in the chicken house. I made sure there was some hay in one of the hoop sheds for these crazy birds. 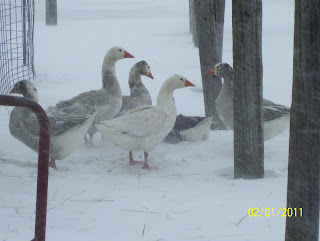 We had a set of twin lambs the morning of the storm. Grampa was kind of worried about them, but they made it through. 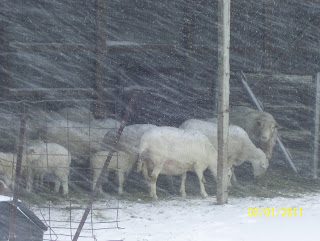 Thought my feather grass would be a good way to show how deep the snow would get. 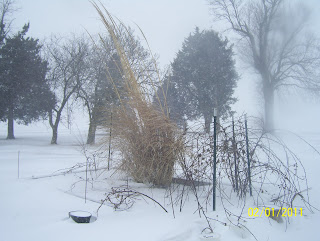 Parked my car out by the road so it would be easier to get out. 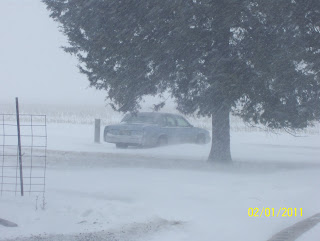 Took a picture of my herb garden, which, by the way, still has the plastic on it! 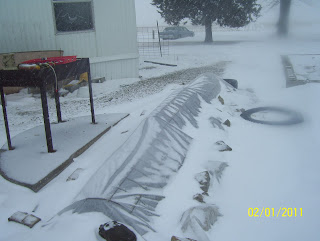 And a picture of Grampa all bundled up with ice in his beard. Well, with all the grey, it is hard to see the ice, but I assure you it is there! 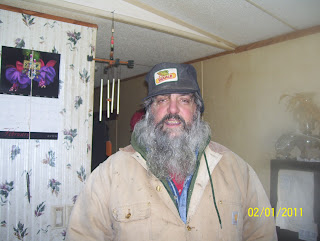 Our trailer rocked and vibrated through the night. Good thing I insisted they put those hurricane straps on it! Then in the morning we ventured out. 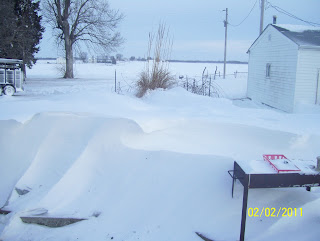 That's my herb garden and the grass I showed you earlier. 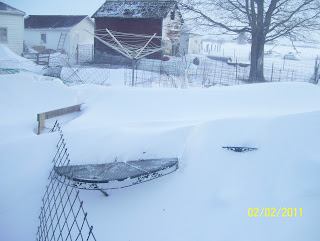 My garden table is still there! 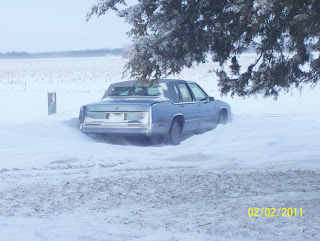 Looks like I picked a good spot to put my car. 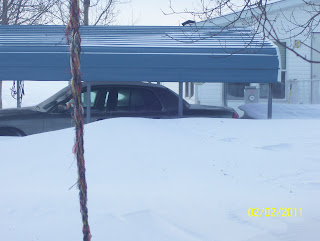 Grandpa Whitson was totally snowed in. Grampa Tom would have plowed him out, but he had a flat tire on his tractor by the time he got done scooping  a way to the sheep. But by afternoon, another neighbor came by with his tractor and dug Grandpa Whitson out. We live in such a wonderful place! There were farmers out all over the place scooping people's drive ways out! 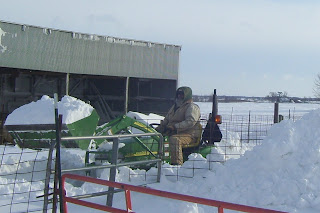 Our dogs were happy! The smaller one spent the night in the house and the two Great Pyrenees stayed under the house most of the night. They did go running off after something once or twice. They are awesome protectors! 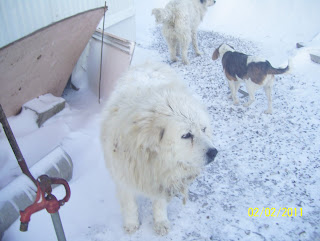 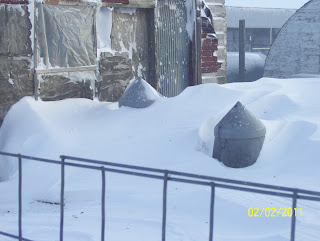 The chicken sheds were a bit hard to get into. These are two of our outside feeders. We had put feed inside the night before because we thought this might be a problem. 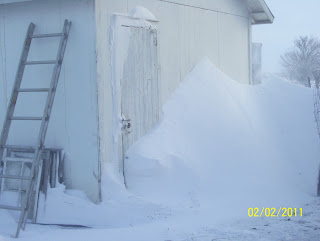 This is the door to one of the chicken sheds. 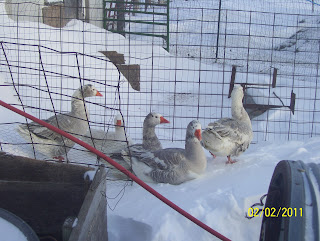 Silly geese were still out. 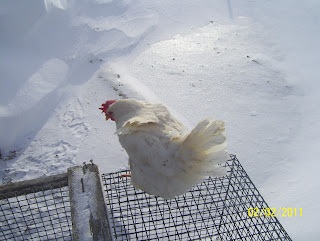 And this one really dumb chicken. 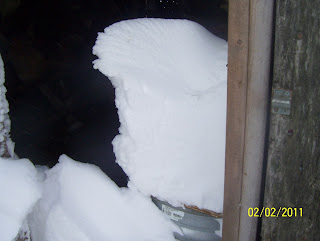 The other chicken shed didn't have any snow in front of it. Just a wall I had to dig through once I opened it. 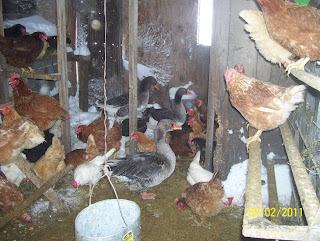 There was quite a mess inside, but everyone seemed to have made it through OK. I used to try to button things up really well when a big storm would come up, but one winter we had two nights when the temp dropped 50 degrees. Both mornings, I woke up to a pile of dead chickens. Later I learned that if you shut chickens up to tightly moisture condenses on their skin causing them to get to cold and die. They need a place to get out of the wind, but do much better if there is plenty of ventilation. 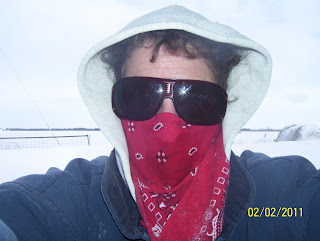 Me! We spent a few hours outside this morning. Grampa has that big old beard to keep warm, but I have to compensate. 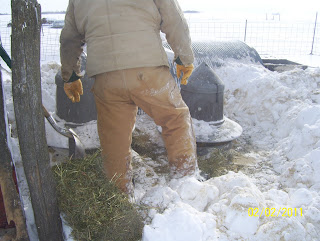 Remember the feeders I showed you? Grampa scooped them out and put hay around. He also scooped out the door to the other shed. 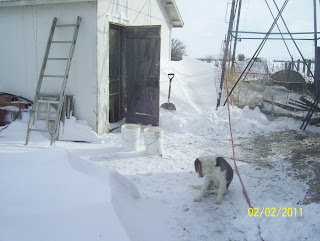 It was kind of a challenge, but not near the challenge that all those people who clear the roads and worked through the night to provide emergency services. Be sure to thank them! They deserve it!


God Bless You All!
~Grama Sue 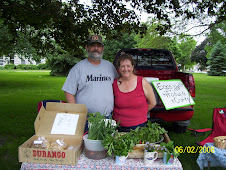